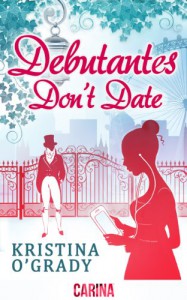 Grace is an event planner who is busy making sure a Regency themed New Year's Eve ball is a success. But at the stroke of midnight she finds herself in the actual Regency Era, skirts over her head.
Jasper Mossman, the Earl of Bingham, comes to her rescue, and Grace decides to whisk him away for a quick make-out.
Which is very much frowned upon during the time period in question, so now Jasper insists they must be married.
This started off on a weird note. Grabbing a complete stranger at an event you're responsible for - effectively during your working hours - and making out with him without so much as a "Hey, you!" is not frowned upon just during the Regency period...
What was this woman thinking?
I guess she wasn't, because she was completely taken by his looks:

"My God, he looked like Ryan Gosling in ‘The Notebook’."

What? Scruffy, blond, and sickly?

"He was the epitome of tall, dark and handsome."

So... I guess not?
When it comes to the narrative, this book is a mess from the start. It's third person limited, but jumps without warning from character to character.
We start out with Grace's point of view, then we jump to Anne's (Jasper's jilted fiancée), then to Jasper, to Grace again, to Jasper, and then to a Mrs Hillary Barrett - all within the first 13 pages!
I mean... what is the author doing?
And Jasper thinks she is related to his business rival... Why is an Earl involved in trade? They wouldn't even dream of sullying their name with anything of the sort during the Regency! They had a man of business to deal with anything to do with money.
Many things happen for nonsensical plot-convenient reasons, for instance, Lord Lancaster, after some ridiculous back and forth arguments, believes Grace to be his American granddaughter by a conveniently absent son... and as it turns out, he is actually her great-great-grandfather.
Anne's brother is indebted and was counting on his sister's marriage to Jasper to provide him with some funds. So, after Jasper and Grace's engagement is announced he eerily tells his sister - who is fully aware of his character - to befriend her ex-fiancé's new fiancée and concludes with the sinister: "you just do your part and I’ll do mine."
Anne, who until now seemed like a sensible woman, just goes along with it because "she would love to have another friend"...
Anne's brother, by the way, is an absurd villain, to the point where he actually laughs maniacally at his own devious plots.
And I really disliked the casual ableist slur from Grace:

“That is retarded.”
“Retarded? I hardly think that’s an appropriate word.”

Girl, when even a man from the Regency era thinks that is wrong... But if you're from 2014 you should know not to say the r-word.
There was some talk of love, to me all there seemed to be was lust, especially when this exchange between the "lovebirds" came about:

“Don’t worry, I won’t let you go,” he whispered as his arms tightened around her body, supporting her weight as he bent her backwards for better access to her breasts.
His words sent ice through her veins and she pushed away from him and stumbled out of his arms. She wasn’t thinking clearly, how could she with blood rushing in her ears? “I don’t belong to you.” She needed to distance herself from him.
“What are you talking about, Grace? All I said was I wasn’t going to let you fall. I would hate to see you hit your pretty little head and maybe knock some sense into it.”

Wow. Romantic.
And on that note, I must say I didn't find anything particularly hot about their sexual encounters, so...

Though, I have to admit there were a few moments that made me laugh, such as:

"Both his heart and his penis leapt with hope."

And Grace singing Carly Simon's You're So Vain at a musical recital.
But this really needed to be better researched, and the plot needed to be properly developed, without so many convenient occurrences and silly misunderstandings to add drama.
Conclusion: an interesting premise but a poor execution.
Kristina O'Grady's official site
Buy Debutants Don't Date