ARC provided by Riptide Publishing through Netgalley
As I read this book's description it went something like this:
Book: "My name's Kate Kane, and when an eight-hundred-year-old vampire prince came to me with a case--"
Me: *yawn* Boring!
Book: "I should have told her no. But I've always been a sucker for a femme fatale."
Me: *stars in my eyes*
Because really: 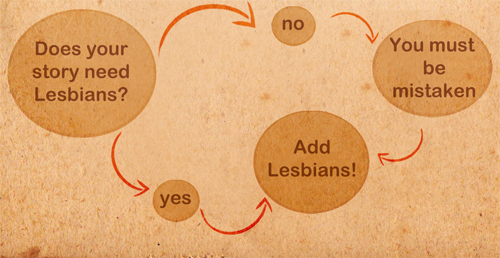 But as it turns out, a story cannot be sustained by lesbians alone.
Kate Kane (not Batwoman), is the child of a being of untold power, who just lost her P.I. partner under undivulged circumstances, and is trying to keep her business from sinking when she's approached by a paranormal hottie with whom she'll become involved.
Sounds familiar?
That's because that is basically the starting plot of Ilona Andrew's Kate Daniels series.
Kate's ex?
A brooding perpetually teenaged vampire, who watches her sleep, is creepy, possessive, and sparkles.
Yeah...
Kate is trying to solve the case of a murdered werewolf in vampire turf, but not only is the whole case incredibly boring, Kate also happens to be unbelievably incompetent. Most times a reader will notice this but just move on. But the author made a point to draw attention to the most aggravating instances of Kate's actions deeming her tstl by using this sentence throughout the book:

A few instances in which this happened:

It's like the author really, really wanted us to have no choice but to remember how inept this woman is.
Why were people hiring her? It's a mystery...
Another mystery: why was everyone falling for her, and trying to get into her pants?
This is a woman who skips showers and walks around wearing a fedora...
A fedora! 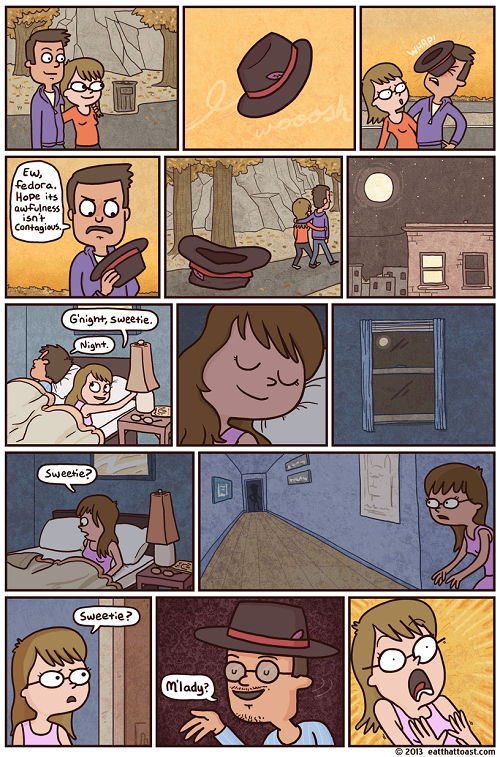 image ©eatthattoat.com
I really did not feel the romance between Kate and Julian. At all. They meet, Julian says some questionable things to get into her pants, they see each other about two more times and in a week they're in love with each other. Where's the relationship development?
What makes an immortal vampire fall for Kate?
Exactly what made Kate go for Julian after a disastrous relationship with another vampire?
I'm going to need a bit more than the fact that they were really hot for each other.
Speaking of which - the sex scenes. I honestly fell asleep reading them. The purple prose didn't do them any favours, nor did this sort of descriptions:

I did give it 2 stars, however, and they were well deserved. Unlike the other books it ripped off or paid homage or whatever, this book was funny. Kate said some very amusing things. Actually, she just thought them, in case you're going, "Oh, maybe that's why everyone wanted her, because she was so funny!" No, she just thought really funny things, but seldom spoke them.
Yeah, 2 whole stars because it was funny, and it deserved it!
See this bit where Kate was just attacked by an eldritch faery monstrosity which attempted to drain her of her life essence:

She reached out and twisted a lock of my hair around her finger. I looked down and saw it shone white in the moonlight.
“You see,” she said softly, “he could have sucked you dry in seconds. I don’t want anyone hurt on my account.”
In a moment of horrified vanity, I checked the rest of my hair, but it was okay. God, what if it had grabbed my boob or something?

But, funny bits aside, it had very little that was truly original, and what was original was boring (it took me four days to get through this book!). Pity...