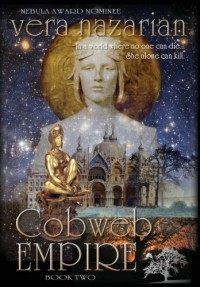 Do you ever regret giving 5 stars to the first book of a series, not because it doesn't deserve it, but because the second book is even better and you have no way to make the rating reflect that?

Because that's the case here.

I absolutely LOVED Cobweb Bride, I think I ended up making myself somewhat of a nuisance and recommending it to my entire friends' list on Goodreads because I couldn't bear the thought that someone somewhere was not, as I was, still trapped in that book's universe and willingly searching for Death's Keep in the Northern Forest. No, they were just going on with their lives...

Cobweb Empire picks up right where Cobweb Bride left off - I can't say where, and how, exactly, because that would just spoil the whole first book for those who haven't read it, but let's just say that Percy is a girl on a mission, appointed by Death himself (this is still weird for me, by the way - in Portuguese Death is a woman...) and the whole troupe is there with her.

But things are getting progressively worse in the world. It's not just the fact that people have ceased dying - places are disappearing at dusk, going missing into the shadows and sometimes, when light returns, they do not come back.
So Percy's mission, which she undertakes accompanied by the Black Knight Beltain, must be completed with the utmost urgency.

Still, Percy has some trouble dealing with her new "status", shall we say... 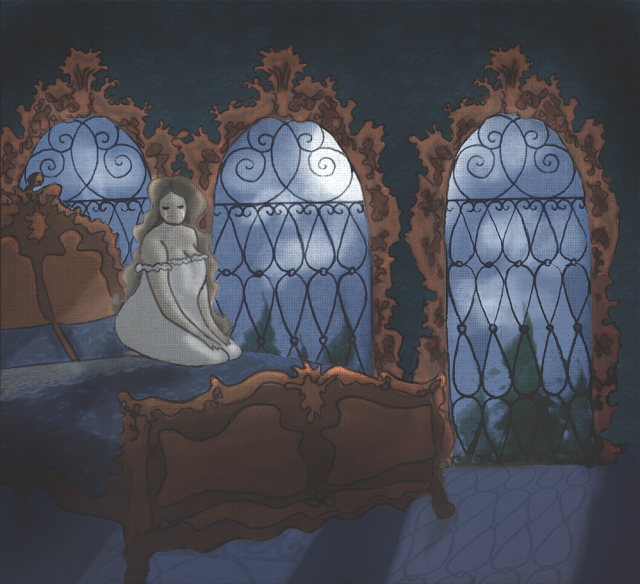 We revisit the delightful Lady Amaryllis and Lord Nathan of Morphea, who are still prisoners and have the most imaginative escape I've ever read! I love these two so much! I really hope we'll get to see more of them!

We are introduced to some new characters - I'll let everyone discover them on their own when they read the book, with one exception: the Sovereign of the Sapphire Court, Rumanar Avalais. I could spend the rest of my life writing about my fascination and, dare I say it, love for evil ladies. For instance, Princess Aurora is so dull, all she does is sleep and sing, but Maleficent? That's a lady with a plan, an awesome name, an amazing wardrobe, a clever pet, and the ability to turn into a dragon. Also, Izma, and Ursula, and all the awesome poisoners, schemers, power hungry women in every story ever. Evil ladies, what can I say? Role models, really.

Her Brilliance (a title I shall claim if my plans to rule the world come to fruition) Rumanar Avalais entered right away into this pantheon. She has the most amazing beauty routine, which consists of draining the life out of beautiful young girls and keeping herself forever young. Right there I was quite taken - but she did all this while ruling her own kingdom and being the very definition of "all shall love me and despair". Plus, she's quite the trickster as we come to find out in the very last page...
I shall say no more but that Rumanar Avalais is probably my second favourite character of this series.

The first being, of course, the undead Infanta Claere Liguon who though admittedly lacking in evil ways makes up for it by being a very frail lady who suddenly finds herself empowered by her death (...or undeath) at the hands of her murderer turned... what? Yes, that's the only downside to this book. I was really looking forward to Claere and Vlau and their complex relationship. Because really, what do you do when you kill someone and then fall in love with them?

Still, I loved this book so, so much! I'm still suffering from an absolutely soul crushing book hangover because of it. Send help. In the form of the third book, preferably.
So join me on this book hangover and enter our:
COBWEB EMPIRE EBOOK GIVEAWAY