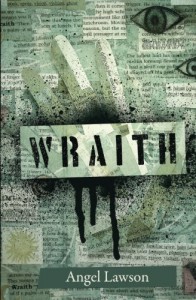 Originally posted at Paperback Wonderland.This would be a 3.5, but I rounded it up to a 4.Jane and Evan are good friends, in fact, while the rest of her classmates avoid her and label her as a freak, Evan has always stood by her and talked her through her problems. Which, in itself, is a problem, since Evan is a ghost and no one can see him but Jane. ...Until Connor, a fellow student who has just returned from a stay at a juvenile detention centre, makes it clear he can see Evan, too. And unlike Jane, Connor is sure Evan is not there as a friend.The plot was straightforward, the writing was simple and things were, for the most part, predictable. But it was good! This book is an example of how, as long as you do it right, a simple story can be a very entertaining story. From start to finish I could not put this book down! The writing lures you in, even though there are a few editing issues.I thought the relationships, be it the ones within the family, the ones between friends, or the romantic ones, were all realistically portrayed. Also realistic was the portrayal of domestic abuse and its effects.I suppose this is a standalone novel, and it does wrap up things nicely, but I wouldn't mind a sequel!
Tweet