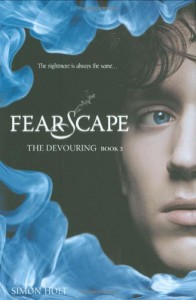 The quality of the writing in this series varies greatly from chapter to chapter. Maybe what they say is true, and there were several writers working on this. But while in the previous two we got some vivid, well-written chapters in between mediocre ones, this book seemed much more imbalanced. Don't get me wrong, there were still some chapters that made the book worth reading (and not just so we can know how the series ends).Personally, what I find terrifying is not so much the concept of scary monsters, but the potential in all of us (maybe the person sitting right next to you on the bus, maybe a member of your family) to commit terrible acts. If you compare how vital it was, how we felt the need for Reggie to save her brother in the first book and all the implications of her possible failure (the destruction of her family, continuous hurt inflicted by someone you love and still feel a visceral need to protect) with the much more cliché and impersonal off-to-save-the-world thing, I think the majority would feel a more primal response to the first one. The book suffered from a lack of the more personal and relatable side of the characters.That aside, it's still a good trilogy and I recommend it.
Tweet