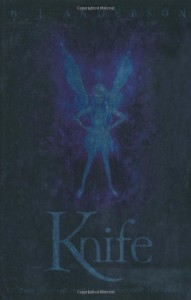 Originally posted at Paperback Wonderland.Generally speaking, I know how good a book is if I almost die while reading it. I tend to read while walking and if the book is good enough, chances are I'll stupidly walk into traffic and almost give some innocent driver a heart-attack. That didn't happen with the Faery Rebel series, I only tripped and fell onto some train tracks while reading them, but I knew then and there that they were wonderful. First of all, the main protagonist is a tiny fairy who still manages to be more badass than almost all action heroes combined. Seriously, Rambo had better watch out for Knife, if he wanders too near her tree - that's how awesome she is. Second, I absolutely LOVE that [a:R.J. Anderson|1330287|R.J. Anderson|http://d.gr-assets.com/authors/1225053848p2/1330287.jpg] included a main character who is not able-bodied. In most fantasy books these characters either do not exist or there's some magic to make it all a-ok. I can not emphasise enough how great it is to have one who, for lack of a more literary expression, "keeps it real". And third, the plot! I could start quoting and commenting but I'd just end up quoting the whole thing and making a fool of myself, and even with the spoilers tag I could not do it justice.Great series!
Tweet