When the Duke Was Wicked (Scandalous Gentlemen of St. James #1) by Lorraine Heath 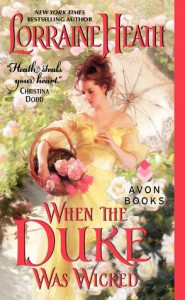 The story itself was absolutely fine, as was the writing, but I never felt any chemistry between Grace and Henry - which is a pity because I had high hopes after having read about them in Falling Into Bed With A Duke.
I knew it was hopeless, but I thought Grace would be better off really moving on from her childhood crush on Henry, plus I found it more than a little creepy how much older he was, and how they knew each other when she was a little girl.
Besides, I really disliked how Henry kept compromising her while being so strict when it came to his own sister. That hypocritical attitude never was to my taste, it seems as if a woman is only truly worth protecting and honouring if she is somehow yours in some way, be it as a mother, sister, daughter or wife. It's just... gross.
And the comparisons between lively Grace and the wishy-washy dead wife were... troubling.
Which leads to the dilemma: this is a really well written story, but I hated the romance and how the characters were portrayed. Henry, for all his heartache, should have been less of a creep, and Grace should have been less naïve, considering all she went through.
Regarding what Grace went through: I REALLY LOVED that such a subject (can't say what it is, since it's a spoiler!) was addressed in HR and involving such a young girl as well, to help dispel the notion that it'll only happen in your later years. And I truly did love how the whole subject was handled.
I just couldn't get into the rest...
So read it and see for yourself because, as always, what doesn't work for me will work for other readers!
Lorraine Heath's official site

Buy When the Duke Was Wicked