YASSSSSS ANOTHER RENEGADE X BOOK!!!
This is seriously one of my absolutely favourite series, so this review will feature a lot of fangirling!
In the last book we see Damien finally make a choice regarding his future. Now we see him trying to see that choice through.
I honestly loved seeing him fight the establishment, loudly disagreeing with the misinformation and propaganda taught in school. Being vocal about the dehumanization of the "enemy" they are being fed.
Of course that doesn't turn out well for him, academically speaking.
One thing I find very realistic in this series is how his father says he'll try to do better and accept Damien as he is, but then he'll get disappointed about it and try to change him. He's always like, "Son, just watch, I will show you how proud I am of you for being true to yourself!" And then we're like, "Okay, let's see this." BUT it always ends up like:

Damien struggles with the need to be accepted while constantly suffering micro-aggressions for being who he is. When he gets the courage to do it, he points it out and the people surrounding him promise they'll do better... then a few pages later they're back to the usual crap. 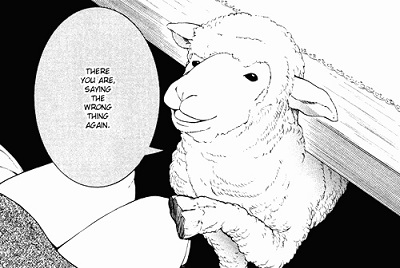 It's disheartening, and painfully familiar to me. I can empathise with how tired, frustrated, and depressed Damien gets in the middle of all this.
This aimlessness strikes him hard. He doesn't feel accepted anywhere.
So when his villain grandfather offers him the chance to make a difference in the world by being the voice for villain's whose human rights are openly broken, Damien feels as if he finally has a purpose, a future, just the way he is.
The best part about this book is how Damien starts to accept that he is who he is, regardless of what other people expect of him, regardless of what other people project his personality to be.

Sadly he still fights for approval, but let's be real, that's what all of us do. Still it's a really powerful message.
So, let me summarise my thoughts on this book:
One thing I love in this series, and that's been slow building, is Damien's relationship with his sister Amelia. They outwardly hate each other, but when the going gets tough they're there for each other. That's so beautiful! I hope we'll see more of it in future books!
There is one thing I must be very critical about: this series deals with many social issues pertaining to minorities - violations of human rights, "fantastical racism", micro-aggressions, etcetera.
But where are the actual minorities?!
Granted, not every character is extensively described, but is there anyone who is not white?
This lack of diversity saddens me, it seems appropriative to address these issues with such a white cast of characters.
I hope I'm wrong and that I missed a few POC in the books, but even so I'm pretty sure none of them are main characters...
Still, as I said, this is one of my favourite series, and whenever I'm down I'll just read it and it cheers me up! So I highly recommend it!
Oh, and when will the hardback be available at the Book Depository? :(
Chelsea M. Campbell's official site
Buy The Betrayal of Renegade X
- amazon
- barnes and noble
- kobo
- itunes