ARC provided by Disney-Hyperion through Netgalley

Kyra is a thief trying to make ends meet when she's taken into the Assassins Guild. There she hones her skills and learns a few new tricks.
Tristam is close to his knighthood when barbarians riding demon cats attack and kill his best friend. This makes Tristam choose a path which will allow him to seek justice for his fallen friend.

I was really, REALLY excited for this book, but that excitement died down within the very first chapter.
Now, don't get me wrong, there is nothing bad about this book. There is nothing particularly good about it, either, and that's the problem.

The setting is the usual lacklustre standard pseudo-medieval fantasy, with its usual clichés, right down to most of the characters meeting in an inn.
There wasn't much in the way of worldbuilding. We're told the general layout of the city, some vague description of social classes and their hierarchy, and that's it.

I didn't dislike Kyra, but I didn't like her, either. She was just... there.
She starts off badly right on the first chapter - the head of the Assassins Guild blatantly hires her to test her skills, and she can't even figure this out. A 17 year old girl who spent most of her life fending for herself on the streets... lacks the street-smarts to see this?
I wanted her to be cleverer! Mind you, perhaps I am a bit spoiled by Megan Whalen Turner's Eugenides, but Kyra never really shined...
She was a good thief because she'd trained herself to physically be so, out of necessity. There is very little of her outsmarting anyone else.

And there's the sense that there was a bit of chickening out in this book: Kyra joins the Assassins Guild. I expected her to learn how to become an assassin? But she can't even bring herself to watch someone take a beating, and spends her time drawing maps and harbouring vague concerns over the morality of her employers. When she kills, she's horrified at what she's done.

"There were steps she wasn’t willing to take. The kill had been an accident. She wasn’t an assassin, and she wouldn’t kill a Council member. She couldn’t."

Then why did she join the Assassins Guild?! How stupid is this girl?!
Obviously, I'm not advocating murder as a viable professional choice for young ladies, but why have one of your protagonists join an Assassins Guild if this isn't used in her training and growth as a character? To sound cool?

Tristam isn't any more interesting. I guess, perhaps, he is even less: at least Kyra has a few protégés and some kind of life outside of her work...

Tristam's story starts with the usual Friendly Target trope - you know, his best friend dies so Tristam can have a purpose in the plot.


He wanted to patrol roads (I didn't really get the concept of knighthood in this book? Wouldn't patrolling roads be a task for a guard?) but his friend's tragic (and inevitable) death makes him pledge his service to Sir Malikel - probably the only interesting character in the book: a foreigner whose cunning and skill elevated him to the role of Minister of Defense.
Tristam expects to fight the barbarians who "kind of" killed his friend. I say "kind of" because let's be honest: it was mostly his friend's own incompetence that got him killed.
Instead we're treated to Tristam building aqueducts and supervising evictions of shopkeepers who can't keep their business afloat with all the raids depriving them of their stock.
As I mentioned at the beginning of this review, the barbarian invaders raiding farms and cities attack with demon cats. As if there are any other kind. 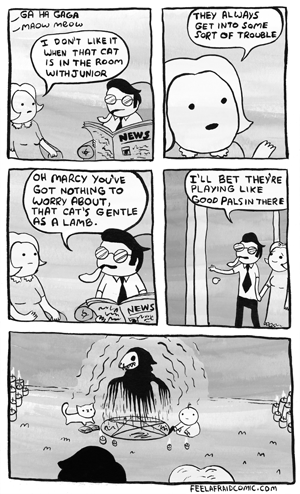 ©FeelAfraidComic
There needed to be more of a marker to signify a change of point of view. We go on for 5 chapters told from Kyra's point of view, and then the 6th is told from Tristam's with no warning whatsoever. I mean, after a few chapters I noticed Kyra's chapters started with a: 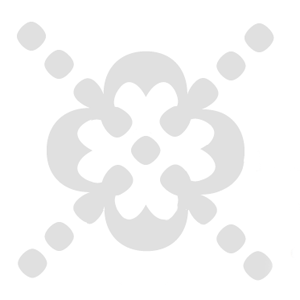 And Tristam's chapters started with a: 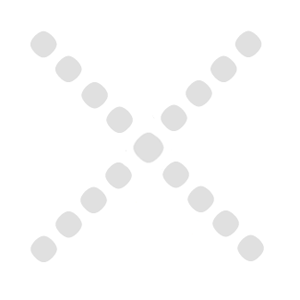 But these are somewhat obscured by the initial at the beginning of the chapter.
Wouldn't it be easier for the reader to just have the name of the character from whose point of view we're reading stated at the beginning of each chapter? Just my opinion...
This book is aimed at readers 12 and up, so it's YA, I guess? But I've read plenty of Middle Grade books more complex and advanced than this...
I'm sorry to say this, but I found this book incredibly boring and extremely simplistic.
Take this with a grain of salt, though. What doesn't work for me, may very well work for others...

arc i actually love cats okay that was a joke netgalley