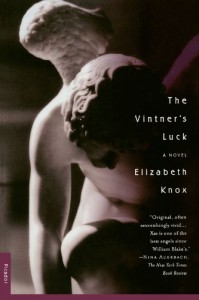 He swooned while still walking forward, and the angel stood quickly to catch him.
Sobran fell against a warm, firm pillow of muscle. He lay braced by a wing, pure sinew and bone under a cushion of feathers.

This is Sobran and Xas' first meeting.
Sobran, the son of a vintner in the early 19th century, is drowning his sorrows in wine - Celeste, the girl he loves, is forbidden to him, there is madness tainting her family's blood, so his father has not given his blessing to the match.
It's between two vineyards that Sobran meets Xas, an angel who has only stopped for a moment. Intrigued by Sobran's very human complaints, Xas reassures him that next year they will meet again and they shall toast to Sobran's marriage.
And so they do, and from then on, once a year, Sobran, an ordinary French peasant, shares the events of his life entwined with the story of his vineyard.

Sobran brought the angel his discontent, a savour to their talk, a refinement, like a paper screw of salt for a lunch to be eaten out-of-doors, at the edge of a meadow.

Xas doesn't speak much of himself or of the curious double mark on his arm, made by Lucifer and God, who determined that "Xas shall go freely." Perhaps angels are mysterious by nature. But along the years Sobran learns of Xas' love for botany (he's trying to grow a garden, and has a special fondness for roses), of Xas' interest in books, of Xas' other human friends - there was an old monk who passed away and was much mourned, there is a Turkish woman to whom he asks for advice regarding Sobran's troubles - it's difficult for an angel to understand humans, sometimes.

And year after year, wine vintage after wine vintage, what they feel for each other grows.

But angels live forever... and men do not.

What he had wanted, with all his heart, was to match this being stride for stride over the miles. But a crippled angel will outstrip a man.