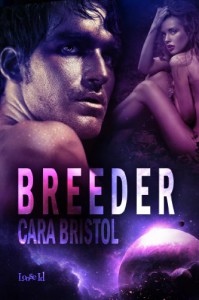 This is a surprise!
Bear in mind this is very much not my cup of tea - BDSM and the like, not my thing.
But that's not why this is a surprising book. It's very unusual to find something so well written in this genre. Furthermore, something which makes the reader really think about gender roles.
In Parseon, relationships are between men. Women, deemed inferior, are only for breeding.
Commander Dak, an alpha, already has a beta - all he needs now is a breeder to perpetuate his line. Enter Omra, whom he buys for that exact purpose.
There is a lot of spanking and disciplining going on, I don't care much for that - no kink shaming! it's just not for me - but what we also find in this book is a plot. An actual plot with rules, and worldbuilding, and characters behaving according to those rules and making choices that make sense - there were no tstl moments here.
I suppose those into BDSM will read this as erotica as well, I read it as a futuristic sci-fi dystopia, and a good one at that. There are similarities with Margaret Atwood's The Handmaid's Tale: a bleak future where women's only worth is as breeders. What we have here is an alien culture which functions within those very same parameters. And the characters within it questioning the culture in which they live, and yearning for change.
One quibble with this book: while homosexual relationships were the norm, there wasn't a healthy and positive exploration of one such relationship, the only positive relationships were heterosexual. This didn't seem deliberate, more the type of thing that didn't make it to the end due to length constraints. But seeing as this is the first in a series, I hope it'll be addressed in the following ones.