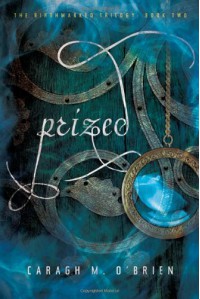 Birthmarked is one of my favourite YA books, it has it all: great world-building, well-developed characters who make realistic choices, a real sense of terror considering what was at stake and, oh wonder of wonders!, no love triangle, no insta-love, no Mary-Sue for a heroine.

There was very little of this in Prized. I don't know, maybe because Birthmarked was so amazing my expectations for Prized were too high. But really, what flowed so beautifully in Birthmarked was stunted and just felt forced here.

The love quadrangle: I get it, new setting, new rules. But Birthmarked was special because the heroine was unwanted. It was special because there was no insta-love between her and the love interest, because what happened between them was built slowly, and it felt beautiful, it felt real. It wasn't even a major part of the plot but it was all the more cherished for that.

In Prized we get Gaia making absurd decisions and going back and forth on the ones she does make. I like flawed characters, the thing is, this just made her inconsistent and unrealistic. Surely, with all that was happening, she had more to occupy her mind than wasting time wondering whom she loved more?

While in Birthmarked there was this feeling of "there may be romance here, but really, now is not the time" (and it really wasn't!), that was set aside in Prized, and in my opinion the book really suffered for it.

Insta-love: I kind of (almost) understand the thing she had with Will, but Peter? What was even the point? If you needed another one for a love triangle (and believe me, you never need a love triangle), Will at least had something in common with Gaia, something Leon did not have. What was the point of Peter even existing?

Leon: That was just... I get it, but I'm really, really sorry to say this because I genuinely like Caragh M. O'Brien's writing... it was poorly executed.

All in all, this book left me feeling that O'Brien was not only trying to make it more conforming to what is generally perceived a YA audience desires but also that she was rushing to meet a deadline.

I hope this is just second book syndrome, like I said, Caragh M. O'Brien's writing is great - I'm giving this a two, I know this sounds horribly unfair, but if it were another writer, one I'd never read before, I'd probably give it a 3.5. But the thing is, I have read a nearly flawless book by O'Brien, and you just can't follow that with... this. I'm sorry! I feel terrible because, as I've mentioned several times, I love her writing, so I have every hope that Promised will amaze me.