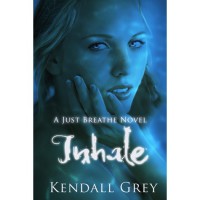 Some of the most overly descriptive, flowery prose I've ever read, and I inflicted Twilight and Fifty Shades upon myself, so that's saying something! Every other sentence has a simile or metaphor in it, I swear I've never read so many "like"s in my life:

"red roses scattering like broken bones on the pavement"

"Scattered fragments of noise pulled together, like metal shavings to a magnet."

"The heavy emotions—the Water—driving the song scattered him like disconnected puzzle pieces."

"The neon white eyes of inky Shadows watched him from nooks within the rocks, beckoning him like Red Light District prostitutes."

"The implications rushed like a runaway bowling ball on a preordained path to a game-winning strike. For the opposing team."

"Like pulling spaghetti from a steaming pot, the jackals dredged out the last few red sparks and fought over them with bared teeth."

"That delicious concoction of anger and lust pounding inside his veins was the purest she’d ever tasted. Like top grade nuclear fuel topped off with a triple shot of espresso."

"his smug, patronizing expression dug under her skin and poked at her last remaining nerve like a ten-gauge needle"

"Smearing the residual gore into her flesh like body lotion"

"The sudden influx of feeling wound her up like a pair of paddles on a flatlined heart."

"Zoe’s heart dropped like an elephant at the mercy of a tranq dart."

I could go on, but I'd be here forever.

A lot of it could have been cut, I meant it when I said it was overly descriptive. Adjectives and useless bits of info weigh down 99% of it until the reading flow has slowed down to a bog.

Seriously, some of these tidbits were not only useless but had me stop reading to try and figure out how they were even possible:

"tipping her shoulder into a flirtier angle" ...what would that be?

"With his free hand, he yanked the tie away from his neck. A button popped off this shirt." ...how?

"Or innocent people woke up dead." ...say what?

Then the flowery stuff:

"Blurry streaks of red sliced open the dusk, eviscerating the air.""Water bled from his soul until it was dry."

"his harsh, jagged edges would never sit flush with her smooth and straight lines."

"The tears called out to him in silence."

The bare bones of the plot aren't bad at all, if you look past the Gary-Stue ("tall, dark, and disgustingly gorgeous" rock-and-roll superstar with magic elemental powers) and Mary-Sue ("fucking beautiful" scientist who talks to whales) protagonists, who meet in their dreams and are meant to be.

1.5 stars because it was well-researched (and, as a scientist, I appreciate that) and the story was original and had potential. If about 200 odd pages of descriptions and similes had been cut (the dream world didn't help any) it could have been an enjoyable read. As it is, I ended up skimming most of it.

I read as a hobby, I like to read. I read to distract myself. But this? This felt like work.