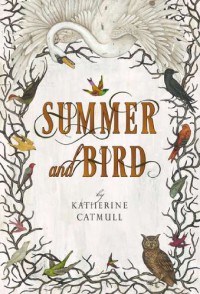 I spent ages looking for this book and I finally got it for my birthday, I was so happy! Well...

This is a very difficult book to rate. First of all, there is absolutely nothing wrong with the writing itself - it's beautiful and it manages to be both whimsical and serious, which is a feat unto itself. Those 2 stars? That's all the writing.

The thing is, the pretty writing was all that kept me reading. I couldn't connect with the characters at all, there was little to differentiate the way the sisters were written - oh, there were details, one looked like this, the other like that, one was ambitious and more bird-like, the other more human and worried about the family, but their voices? There wasn't much to tell one from the other. And what characterization there was ended up too odd, too alien to allow me to connect with them - granted, it serves the plot, but it does not serve the reader.

The plot had so much potential! An evil puppeteer who wastes herself away to become more bird-like and feasts on birds for the same purpose. An exiled bird queen. Two little girls with a mysterious heritage. But it was SO slow!! The pacing was terrible, it seemed like it was just writing for the sake of writing - very pretty writing, but the story went nowhere for ages. It took me 3 months to read this book. 3 months!!!

I hate the ending. I'm not one of those who has to have a HEA, though there's that expectation, especially in a children's book, but it was just unsatisfying and empty.

I don't know, maybe it was just me, maybe I personally couldn't connect with this book. So go ahead, give it a chance, the writing is worth it, I didn't care for the rest, but maybe others will.